Okay, I admit I'm all thumbs when it comes to setting up anything on the Internet. But the new Seven Kitchens site over at Word Press was going along so well--so well that I thought installing those little Paypal "Buy Now" buttons would be a snap. They were a snap to install on Blogger. But even though I can see the HTML code pasted correctly on my Word Press pages, I don't see the button when I switch to view the saved page in regular ("visual") mode.

I don't know what I'm doing wrong. Maybe they are only visible once the site is publicly searchable? --That doesn't make sense, because I want to get everything loaded before it goes public.

Up too late again

I mean, yes, I can always find something to do (two new chapbooks launched the same week, am I that crazy?) but I am not, I repeat not, a night owl.

Yes, two chapbooks: To the Refrigerator Gods by Terry Kirts came out on Monday--#8 in the Editor's Series, and on Wednesday (today) (though it's already Thursday), Guillermo Castro's Cry Me a Lorca came out--#4 in the limited-edition Summer Kitchen Series. I've been up late putting together a big batch of copies and cheating on my Red Sox by half-watching the Mets' lackluster effort to avoid being swept by the Diamondbacks. I gave up in the 12th inning: don't know, don't care.
_____

I've spent hours every day this week typing in book & author data for Seven Kitchens' new online home. Yeah, we're jumping over to Word Press on August 1st, ready or not. I think we'll be ready. All the book pages are loaded. I need to add Paypal links (which should be easy, having just done this last week on the Blogger site) and move all the author updates to new subpages. That'll take about a week. Then a few days to let our authors preview the site and hit me back with any fixes that need attending to. Then we launch!

I should have a party. Or even better, a sale. But I wanted to have a sale this fall on our three-year anniversary, if I can figure out exactly when that is.
_____

Slowly cutting through the pile of papers and files on my desk. There were two piles; now there's only one, and I made a good dent in it today. Progress! I want to make room for my old printer here on the desk beside the laser printer: I need it for color scanning and for printing drafts.
_____

Harvested the first good handful of tomatoes today. We've been eating the yellow pears as they ripen, one at a time. These are thumb-sized, red tomatoes, I can't remember the name. And the yard-long beans, which I planted way too early in May, have suddenly come alive after languishing beneath the peas for months: tendrils snaking everywhere, and even a couple of flowers, though they were surprisingly dull--I was expecting more yellow or pink or even cream-colored blossoms, but these were a drab dirty-dishrag off-off-white. If I were a bee I wouldn't even stop to investigate.
_____

There's a birthday with my name on it, and I can almost hear it slouching towards Lewisburg: the Big One. The half-century mark. I don't know what fifty is supposed to feel like, but I do admit that as I edge daily closer to this milestone, my ability to accommodate it as a tangible aspect of my reality, my identity, sheers off increasingly into disbelief.

New venue for reviews of poetry and nonfiction

Palmer Hall has launched a new online venue for reviewing poetry and nonfiction: The Yanaguana Literary Review. You can find it here.
. . .

Turned in my keys and ID today at Lyco. They asked for my parking decal as well. (Sure, no problem.) The only surprise was that there's no way to store & retrieve three years of e-mail, unless I go back in, have someone unlock my old office, and painstakingly forward each e-mail to myself. Umm, I could have used that information a few weeks ago; at least I'd have had time to forward some of the important stuff. 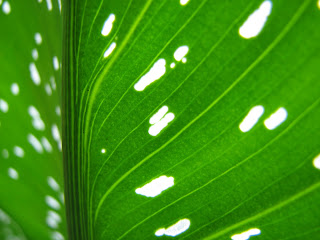 Last year we bought some lovely yellow callas. I can't remember how long they bloomed, but I was eager to try to keep them over the winter and see whether they'd repeat the show this year. Late in the fall, when the leaves had started yellowing, I brought them into the kitchen and tucked the pot (a rather large brass pot that I'd lined with a heavy plastic trash bag) against the corner of the kitchen table where it would be out of traffic. The remaining leaves died quickly and were gone within a week.

And that was that. I think I sprinkled a little water on it once over the whole winter.
Then, in early March or maybe even late February, I started getting curious. I watered the soil sparingly, then, a week later, more generously. And as soon as I saw the tiniest points of green emerging, I moved the pot to a bench in the laundry room--more susceptible to changing temperatures but also to steadily increasing sunlight.
And the plants have leafed out beautifully. I especially like the small translucent spots in the leaves. But so far, no blossoms. The pot sits on the corner of our back door stoop, where it gets bright light for most of the day and a couple hours of direct sun. I'm feeding and watering regularly. Are leaves all we can hope for this year? Did some process of "forcing" that the callas may have gone through in order to be sold at market last year render them "spent" for this year? Are they recovering the urge to bloom? Or am I just being hasty: are they waiting for high summer?
Will report back on any new developments.
Posted by Ron at 6/23/2010 12:04:00 PM No comments: 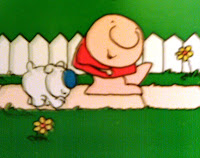 I've been cleaning the upstairs bookcases at the rate of roughly one shelf per day. So many books to sort through--keep out? box away for now?--and then there are the binders. Binders dating way back. Binders containing every rejection slip I received for my poems. Binders full of correspondence. Binders of journals from high school. Binders documenting people (and years) I don't even remember.

Oh, God. Did I ever buy Ziggy cards? I think I did. And smarmy pastel Blue Mountain Arts cards with insipid verses by Susan Polis Schutz. I always thought it was Schultz. But no, here's a card copyrighted 1982, all salmon and purple, and it's Schutz: When the/world closes in/and lies so heavily upon you.../ remember that I care. (It goes on. I won't.)

Labels: schlocky stuff we do when we're young

June 27th is the deadline for this year's Oscar Wilde Award (Gival Press) for the best previously unpublished poem in English that best relates GLBT life. The reading fee is $5 per poem of any length, form, or style. The winning poem will be published on the Gival Press website and carries a prize of $100. Previous winners are Chino Mayrina, Stephen Mills, Pablo Miguel Martinez, Dante Michaux, Julie Marie Wade, Jeff Walt, and some guy named Ron Mohring. Visit the web site for complete details (click on "contests" and then "Oscar Wilde Award-Guidelines").

July 1 is the deadline for the anthology Queer Girls in Class: Lesbian Teachers and Students Tell Their Classroom Stories, a collection of personal narratives. . . For more information or to submit work, e-mail: queergirlsanthology@gmail.com.

July 1 is also the deadline for entries to the Atlanta Queer Lit Fest's Broadside Contest. The winner will receive $200, 100 copies, and a keynote reading invite at the festival. Full details are at http://www/atlqueerlitfest.com/. 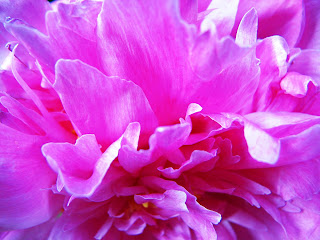 [photo: peony, Mom's garden, May 2010]
I've spent time every day this month working on chapbooks: proofing pages, printing, folding and cutting and tying, mailing copies. I'm still not caught up with some of the copies I owe, but the new titles are coming along very well and I think I can stay on track with the summer schedule.
It's fulfilling work. It nourishes a part of me that exists mainly in solitude. I can't emphasize strongly enough how deeply I love this work.
What it doesn't do is pay the rent. June, June: Will you bring me a new job?
Posted by Ron at 6/12/2010 04:41:00 PM No comments: